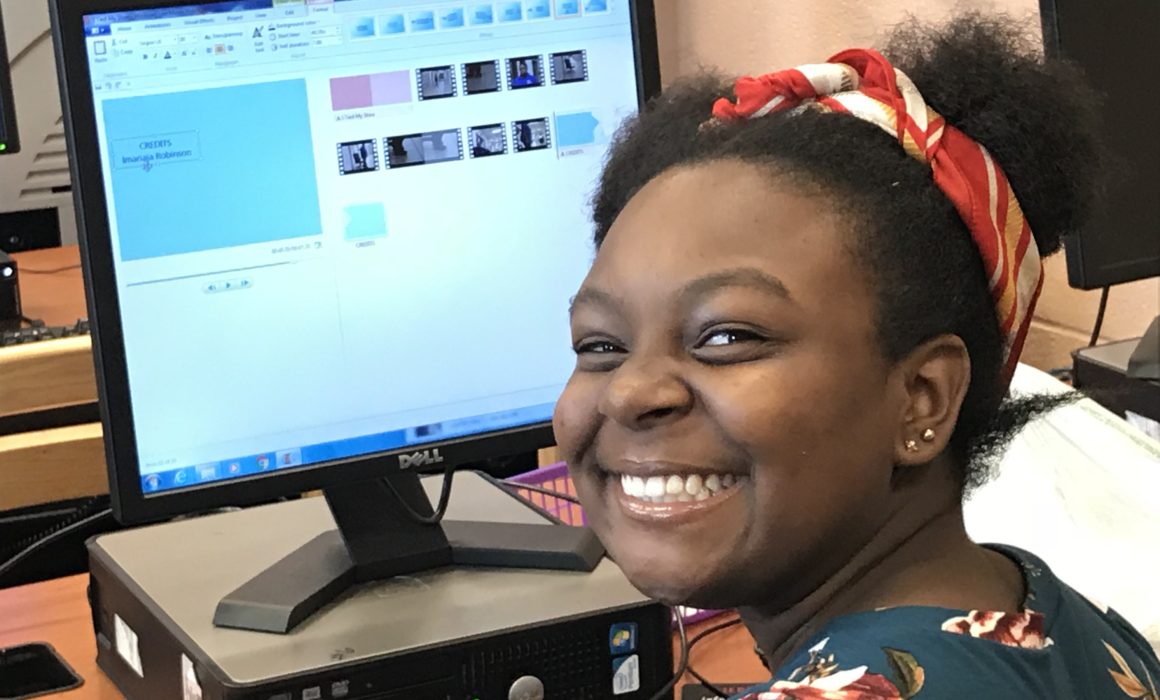 It was during my time as director of the Nickelodeon Theatre’s Helen Hill Media Education Center that I was introduced to its’ namesake. Helen, a Columbia native, was an extra-ordinary filmmaker and artist. I was unfamiliar with her work in 2013, but I was very familiar with her passion – filmmaking and education.

I took the position as Director of the new center because of my own passion for film and education. After years of attending career fairs and hosting field trips during my tenure at Genesis Studios, I deeply felt a need to do more. At the center I had the opportunity to create programming, change curriculum, and give young kids tools that could potentially change the trajectory of their lives.

This past summer, for the second year in a row, I had the pleasure of hosting a three week Media Literacy Workshop for the Olympia Learning Center here in Columbia, SC. Students and teachers got a chance to learn the basics of moving image literacy.  Basically, how to use the video camera to communicate a story, message or idea. I take great joy in teaching people the tools to change the way they think and teach them how to look at video in a totally different way. But the absolute ultimate joy I feel is when a person  has that “eureka” moment.

Watching a “eureka” moment happen in real time is like watching your favorite team win the game on a buzzer beater.  It’s the same feeling of watching the joy on a child’s face after their first bike ride without training wheels. It is complete euphoria.

This occurred several times throughout my workshop at Olympia – with teachers, students, and administrators. But there is one moment I will never forget.

The first day Michael came to our session was at least a week into our workshop. I’ve seen kids like him hundreds of times. Baggy clothes, not speaking, clearly bored with the lameness of school as well as the students around him. He came in and slumped over in his desk to sleep. It didn’t take long for me to know he was a problem student. In fact, I later found out our session was the first time he has participated in any class that summer.

Something remarkable happened only fifteen minutes after class began. Because Michael didn’t have a partner to film his first practice exercise, I decided to partner with him. At first, it was complete resistance. More than once he stepped away from the camera to mention how “this was lame” and that he didn’t know what to do because he had never done it before. That last statement was often followed by a snicker – a small punctuation to let me know how ridiculous he thought this class was.

But then, it happened.

About halfway through the exercise Michael started giving me his own thoughts on direction. By the time we got to the last shot, Michael was fully directing. He quickly understood the concept of how a wide shot, medium shot, or close-up can be used to communicate a thought. I could see his mind visualizing how each shot would work together in the edit. His eyes would wander each time he looked in the air when directing me on that last shot. Several times he moved the camera, mumbling phrases to himself like “no, that doesn’t work” or “yeah, that looks good right there”.

In one hour, Michael went from the kid who doesn’t want to be here, to asking me after class if I would be at the school the next day. His last remark being that he thought my class was “dope, yo.”

Little did Michael know, that when he walked out of the class to leave me there alone,  my eyes welled up with water. Which I quickly wiped away in case he, or anyone returned.

That feeling of euphoria had hit me again. I knew that Michael “got it.” But I also knew in that moment that ANYONE could “get it.”

Michael only came back twice after that day. Another student finished the edit on his film, but we made sure to put his name in the credits. Turns out Helen was right, anyone CAN make a film. All they need is a good idea…and the tools. And maybe a instructor that cares doesn’t hurt either.